Egyptian National Police or ENP is a department of the Ministry of Interior of Egypt.

In the early Twentieth Century, the holder of the post of Interior Minister was called: "The Interior Superintendent". The title was used until 1919 when World War I broke out and Britain declared Egypt as a protectorate. As a consequence, some political posts and titles were changed and the "superintendent" was among the titles included; it was changed to a Minister. Tahseen Rushdi Bashi was the first person to hold the title of Interior Minister in Egypt.

As time went on, many Prime Ministers assumed the post of Interior Minister – in addition to their Premiership- being among the posts having major control over the internal events. The post enabled its holder to control elections, select executives and have an eye on political opponents. When Saad Zaghloul Pasha assumed the Interior Minister post in 1934 – along with his premiership- the Ministry was characterized with a political trend. He tended to dismiss persons who opposed his ideas and began to employ and promote those who struggled with him. Ever since, and for a long time, the Ministry employees were left under the mercy of political changes and election results. But when the famous thinker, writer and lawyer Mr. Ahmed Lutfi el-Sayed was appointed as an Interior Minister, stability prevailed the Ministry.

When Egypt was proclaimed a republic in 1953, Gamal Abdel Nasser ; member of the Revolution Council – and later on the President of the Republic – was keen on assuming the post of Interior Minister, in an attempt to proceed in the career path he planned for himself.

Interior Minister's post – like other major posts in Egypt- was assumed for a long time by non-Egyptian ministers with no police or security background. Currently, it is a must that the Interior Minister be a descendant of Egyptian parents and a graduate of Police College. Premiers are no longer capable of assuming both posts as Interior Minister's post has become completely separate due to the enormous and significant tasks it entails; being directly in charge of preserving citizens' security, safety and properties. The Interior Minister has to relinquish his title as a police general and his name is only preceded by the title (Mr.).[1] 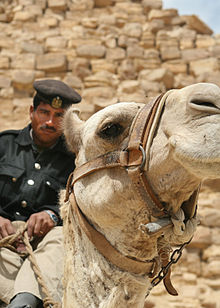 The Ministry of Interior divides the functions of the police and public security among four Deputy Ministers of Interior while the Minister of Interior himself retained responsibility for state security (Qitaa' al-amn al-watani),[2] investigations and overall organization.

There are four Deputy Ministers:

The urban police have more modern facilities and equipment, such as computers and communications equipment, while the smaller more remote village police have less sophisticated facilities and equipment. The police became increasingly motorised and it is now rare to see an officer on foot patrol except in city or town centres, and then rarely alone. An increasing number of urban centres police bicycle units are used to provide a quick response in congested areas, pedestrianised areas and parkland, as well as carrying out patrols.

Almost all commissioned officers were graduates of the Police Academy at Cairo where police had to complete four years at the academy. The Police Academy is a modern institution equipped with laboratory and physical-training facilities. The police force also sent some officers abroad for schooling.

Advanced officer training was given at the Academy's Institute for Advanced Police Studies, completion of which was required for advancement beyond the rank of lieutenant colonel. The academy's three-month course for enlisted personnel is conducted in a military atmosphere but emphasizes police methods and techniques.

Some police officers, especially the special operations officers, are well trained by the Egyptian Armed Forces in Al-Sa'ka Military School.

The Tourism and Antiquities Police covering every single spot tourists could go to like sites, museums, hotels, etc. Places such as the Great Pyramid of Giza, Memphis Giza, Egyptian Museum, etc. in Cairo, Alexandria – Qaitbay Citadel and the Serapium Temple and Pompey's Pillar, etc., going through all cities in Egypt carrying same weapons as law enforcement police.

Unlike in many other countries, the Egyptian police extensively use SUVs. The Egyptian produced Jeep vehicle used to be the most common police car in Egypt but in recent years, other similar vehicles have also come into police use. SUVs are known for their capabilities to move around in any sort of terrain. Depending upon the location, the police vehicles may have individual revolving lights (strobe lights) or light bars, sirens etc. An extensive modernisation drive has ensured that these vehicles are equipped with wireless sets in communication with a central control room. Traffic Police vehicles generally also have equipment like speed radars, breath analysers and emergency first aid kits. Color schemes of police vehicles vary according to their location and which directorate they belong to.

For traffic regulation and patrolling in cities, motorcycles are also used. This is because of increasing congestion in cities where the heavier bikes would prove to be unwieldy when compared to the nimbler handling the newer bikes were capable of. The bikes are provided with two-way radios, strobes and sirens and are generally painted white. Some cities make use of sedans as patrol vehicles or high speed 'interceptors' on highways. Of late, the various police forces are on a modernisation drive, upgrading and revamping their fleet with new vehicles.

The police in Egypt lost some prestige during the 2011 Revolution. According to one source (csmonitor.org), the Egyptian police, "once feared by civilians, are now seen as leftover elements of Mubarak’s regime and treated with little respect. Pulled off the streets after violently cracking down on protests in January, they are now trying to reshape their role in the post-Mubarak Egypt."[3] Police brutality is credited with being one of the causes of the revolution,[4] and as of June 2011 several police officers are being tried for the killing of "hundreds of demonstrators" during the revolution. According to government statistics, 90 police stations have been burnt since the start of the revolution.[3] The government has taken steps to address public concerns and police demoralization.[3] In response to a planned July 8 rally protesting the release on bail of police accused of murdering protesters during the revolution, interim interior minister Mansour el-Essawy promised to purge up to 700 corrupt senior police officers. However protesters complained that five months after the revolution where almost 1000 people were killed, only one officer has been convicted of wrongdoing and he has not yet been incarcerated.[5]

Mass demonstrations took place for and against former elect President Morsi on 30 June 2013, marking the one-year anniversary of Mohamed Morsi's inauguration. The police, along with the military, had made it clear that they were with anti-government demonstrations. National Training Academy

The August 2013 Rabaa Square evacuation by police to remove pro-government protesters from sit-ins being held in Rabaa Al-Adawiya and Al-Nahda square in support of President Mohamed Morsi resulted in rapidly escalating violence that eventually led to the death of over 800 people, with at least 3,994 injured.[6] The police attempted to defend their actions by claiming to disperse the sit-ins with the least possible damage.[7]

According to writer Ahdaf Soueif, since 2005 the police have routinely grabbed women protesters and torn "their clothes off and beat them, groping them at the same time. The idea was to insinuate that females who took part in street protests wanted to be groped." To protect against this, many female protesters wear "layers of light clothing, no buttons, drawstring pants double-knotted".[8]